The Rise of Blockchain Jobs

Knowing how blockchain works, doesn’t mean you understand how to apply it or even where. If you have development experience, you can pick up the basics and fundamentals behind the blockchain infrastructure, quicker than most.

But the problem blockchain technology brings, is that it encompasses multiple subjects and concepts into one larger concept. For blockchain developers, this requires a comprehensive understanding of economics, politics, finance, data security, etc.

Let’s make one thing clear the foundation of blockchain, cryptographic ledgers, has been utilized in many applications long before Bitcoin made its appearance in 2008, rendering itself separate and apart from Bitcoin and any other cryptocurrency.

With over a $271 billion market capitalization, cryptocurrencies only emphasize an increased demand for blockchain jobs, requiring a rising demand for various technical skills across all industries.

Want to Break-In?
Here’s What You Need to Know

Depending on whether you are seeking a technical job or a non-technical job, you still need to have a fundamental understanding of how blockchain technology functions.

A great resource is IBM’s Blockchain for Business, released in 2019, which you can purchase on Amazon. Other resources include Microsoft, Visa, JPMorgan Chase, among others who offer courses and materials that help the average consumer understand the function and utility behind blockchain technology.

To penetrate the niche, requires an understanding of how smart contracts work, which means you must understand its platform, Ethereum. 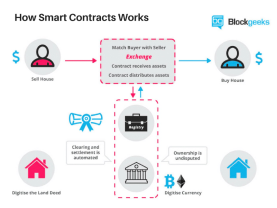 After that, you need to understand Ethereum’s programming language, Solidity. For more information on this, please click here.

Blockchain Developers are the most in-demand niche job in the tech sector because they are the ones who get paid the highest, and depending on where they are working Silicon Valley, a developer can expect a nice salary of $158,000 per year. Compared to a senior hardware developer at NVidia, who has an annual salary of $135,000 per year, not too shabby.

Did you know that as of the date of this article, blockchain jobs are the highest paying tech roles in the UK, yielding an average annual salary of $50,000 to $90,000 a year?

Back in May 2020, China officially began recognizing blockchain jobs as a new occupation, with the People’s Bank of China calling for further acceleration of blockchain adoption strategy. At the time of the announcement, Chinese authorities were testing two major blockchain projects China’s central digital currency, the digital yuan, which is being trial tested across Shenzhen, Xiongan, Chengdu, and Suzhou; and the Blockchain-based Service Network, which launched in April.

What About Freelance Developers?

On average, freelance consultants and developers get around $50 to $100 per hour.

Suffice to say, not all jobs in the blockchain space require a technical background. There are of course many non-technical positions, such as operations, design/product, business, sales/marketing, management, and content.

Now, these are traditional positions outside of the blockchain sector, but when companies are hiring for these positions, they are looking for very specific skills that will aid in the development, growth, and/or utilization of blockchain tech in that company.

Where Do You Go?

If you’re looking for positions in the blockchain space, you can always check out Indeed.com, Glassdoor, or even Bountyone.io.

Other positions include freelance writing/journalism, public relations and marketing, and academia.