What is Balancer (BAL)?

Balancer is a DeFi protocol based on Ethereum that allows for automatic market-making (AMM). Unlike a traditional market maker/liquidity provider which buys and sells financial instruments, an AMM is a market-making agent that is controlled by algorithms that define rules for trades.

Other DeFi platforms like Uniswap and Curve also support AMM. Bringing Balancer as an AMM into Ethereum’s DeFi ecosystem, the assets in a market, along with the algorithm controlling that market, and the ability to create such a market all become decentralized.

Balancer stands out because its growing assets per market, and growing, along with custom trading fees set by the pool creator.

As between Uniswap and Balancer, please see the table below:

The “Flywheel Effect” and Balancer Pools 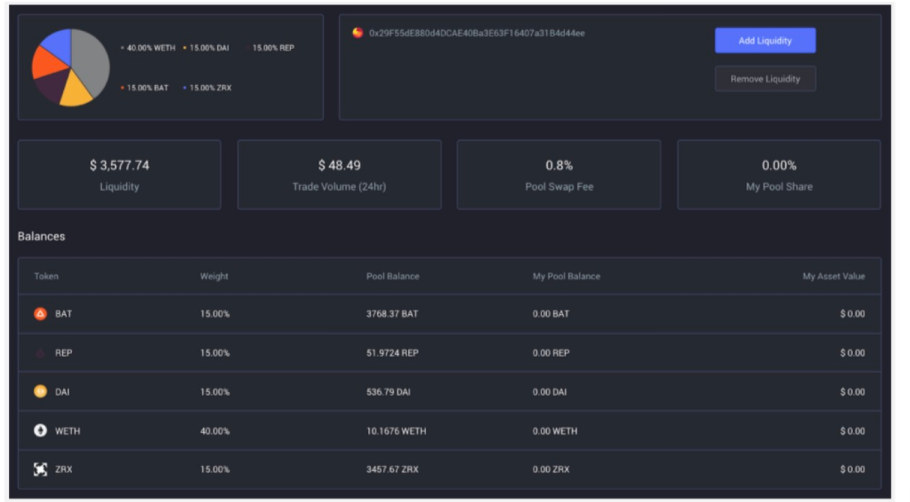 Users are able to deposit supported assets into pools, providing liquidity to users of the pool. For those users who choose to deposit their assets into the pool, they earn a fee. However, when users provide liquidity, there’s never a guarantee they keep their assets, as there are cases where some liquidity providers may lose them.

Pools also allow for users to trade tokens, with Balancer’s smart order routing system, which helps ensure the exchange of crypto at low fees and at quick speeds.

Comparing Balancer to centralized exchanges like Coinbase and Binance, which use order books to derive prices (think of Kelly Blue Book for motor vehicles). The price of tokens in a pool is based on their deviation from their set weighting. Based on Balancer’s flexible parameters, pools serve as more than just a locale for crypto holders to exchange their assets. Balancer Labs has released pool schematics to remove the risk of LPs losing their assets.

The protocol implementing layer two solutions, introducing fees at the protocol level to generate revenue, and the list goes on.

“Layer 2” refers to a secondary framework or protocol that is built on top of an existing blockchain system. Example include Bitcoin Lightning Network and the Ethereum Plasma.

On June 28, 2020, a transaction taking more than 8 million gas, or about two-thirds of an Ethereum block, stole over $500,000 in Ether, Wrapped Bitcoin (WBTC), Chainlink (LINK) and Synthetix (SNX) tokens. 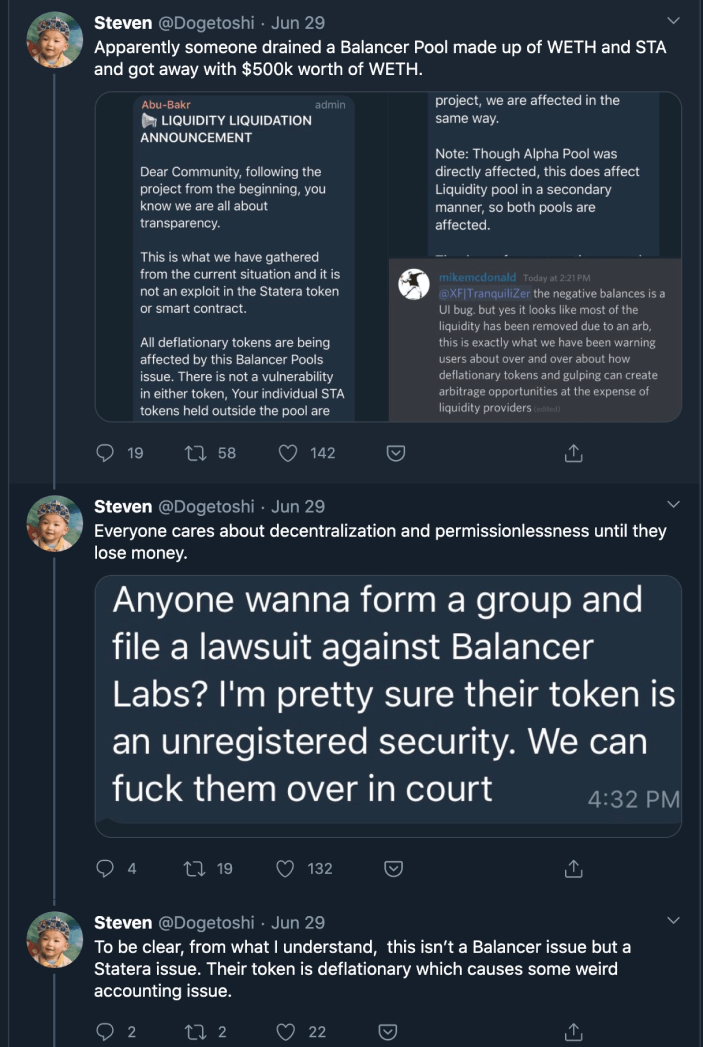 So, what exactly happened?

Remember, Balancer is decentralized, allowing for anyone to create a pool for any crypto asset, with any parameters.

Ethereum users created pools for transfer fee/deflationary tokens, which burn a portion of the coins sent in transactions. The problem is that Balancer Labs warned against this, placing deflationary tokens in pools.

Consequently, an attacker obtained a large sum of Wrapped Ethereum through dYdX, used those coins to trade WETH and STA back and forth. Those deflationary tokens also led to the pool’s downfall, causing the pool’s STA balance to reach one weiSTA, or one-billionth of a coin. This was corroborated by Balancer Labs.

Following the attack, Balancer Labs ultimately blacklisted transfer fee tokens like STA, in efforts to minimize the chances of pools and maliciously designed tokens, and created a third-planned security audit.

Part of that audit also included Balancer’s bug bounty program, which was designed to to “fully reimburse” all LPs affected in the crypto hack. While this wasn’t made a precedent, the company felt it should be held accountable for something it should have done better to guard against. 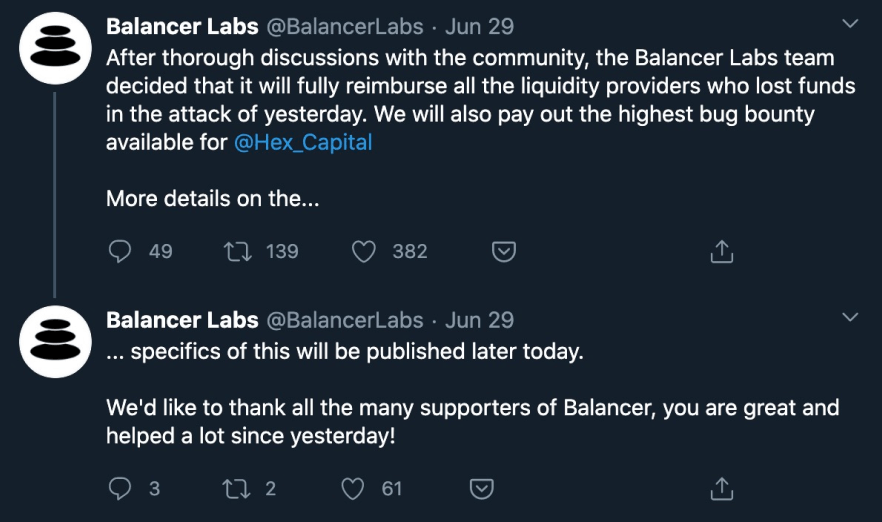