What is Bitcoin Cash?

‘Bitcoin cash’ (BCH) is a spin-off cryptocurrency created in August 2017, from a fork of Bitcoin. Bitcoin Cash specifically increases the size of blocks, which allow for more transactions to be processed. Bitcoin Cash can be broken down into Bitcoin Cash ABC and Bitcoin Cash SV (Satoshi Vision).

When you hear the term ‘Bitcoin Cash’ thrown around, it’s because it uses the original Bitcoin Cash client, despite the two categories.

When Bitcoin’s founder, Satoshi Nakamoto unveiled the concept in 2008, Bitcoin was meant to be a peer-to-peer (P2P) cryptocurrency that was to be used for daily transactions. As Bitcoin grew in popularity over the years, it became more mainstream, causing its price to surge astronomically. 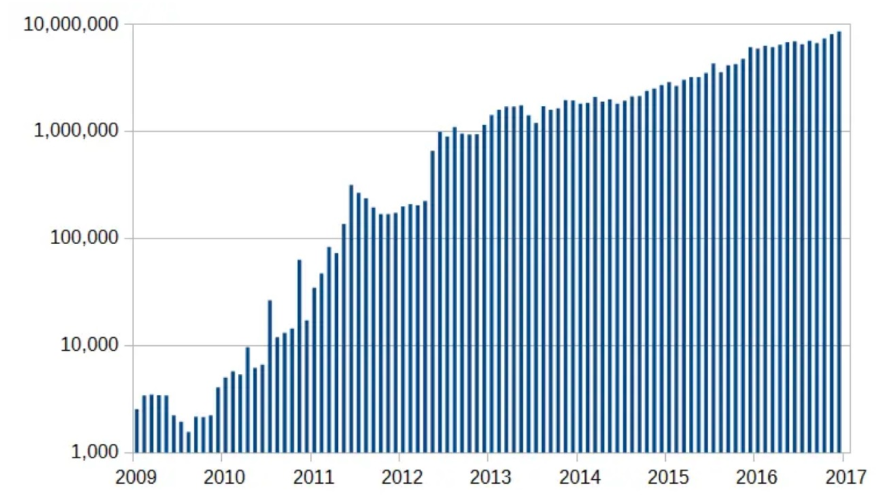 The number of Bitcoin transactions per month over eight years | Source: Wikipedia

Due to this surge, Bitcoin (accidentally) transformed into an investment vehicle, rather than a currency, despite Nakamoto’s vision. At this point, Bitcoin’s blockchain experienced scalability issues, because it simply couldn’t handle the increasing number of transactions that began to occur (thanks Silk Road).

As a result, the confirmation time and fees for a single transaction on Bitcoin’s blockchain surged, due to the 1MB block size limitation for bitcoin. But why have such a low size capacity?

Simple. The developers implemented the 1MB size limit because they wanted to reduce the number of spam transactions that could clog up the entire network. This design was done intentionally.

Due to this limitation, transactions were queued up, waiting for confirmation, because the blocks couldn’t handle the ongoing increase in transaction sizes.

Under this system, Bitcoin processes an average of 1,000 -1,500 transactions per block. Still too slow.

A Solution to ‘Block Size?’

Bitcoin Cash specifically addresses Bitcoin’s issue when it comes to block size. Bitcoin Cash’s system aims to remedy this by increasing the size of blocks (from 1MB) to 8 MB and 32 MB, allowing for more transactions to be processed per block.

Back in September 2018, a “stress test” was conducted where Bitcoin Cash’s blockchain increased the block size to process close to 25,000 transactions ber block. A huge increase.

Other proponents of Bitcoin Cash believe that by changing bitcoin’s block size, will allow for bitcoin to be used as a medium for daily transactions (closer to Nakamoto’s initial vision), helping it to compete against credit card processors like Visa, which already charge high transaction fees.

Every Bitcoin holder received an equivalent amount of Bitcoin Cash, which multiplied the number of coins in existence. When Bitcoin Cash first debuted in July 2017, it started at $900, but still wasn’t supported by major exchanges like Coinbase. 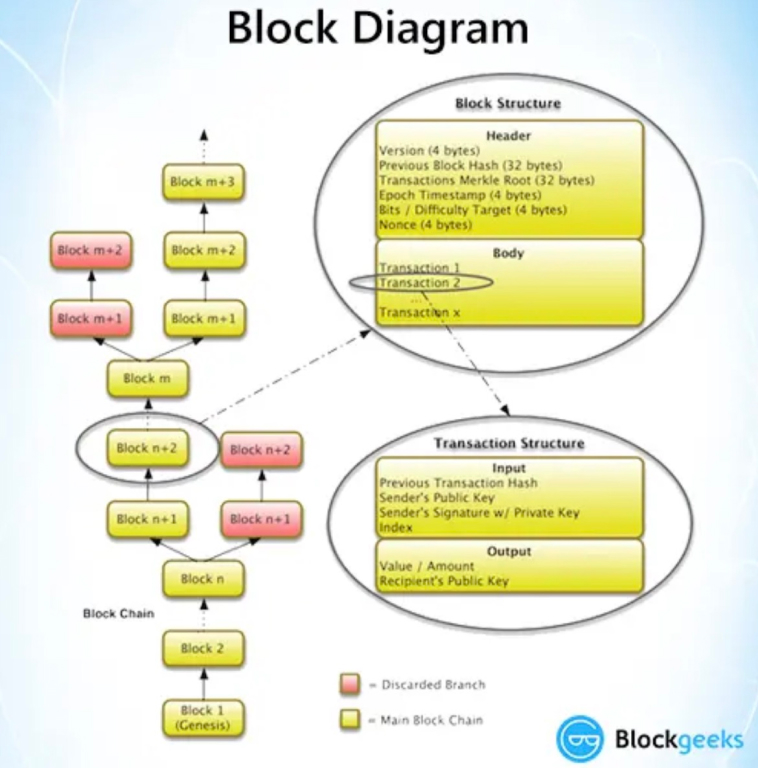 Unlike Bitcoin, Bitcoin Cash does not incorporate Segwit (Segregated Witness), which would ultimately create more space in the blocks for more transactions.

SegWit is the process by which block size is increased by removing signature data from Bitcoin transactions. By only retaining the information or metadata specifically related to a single transaction in a block, this frees up space or capacity to add more transactions to the chain.

When the developers first built SegWit, they added a special requirement: it could only be activated when it has 95% approval from the miners. Why? It’s a big change to the system.

But this requirement created problems for miners, because most miners don’t want SegWit to be activated. Understandably so, by increasing the available block space, this could have a large impact on the number of transaction fees they get (ultimately reducing them).

So, miners inevitably stalled the approval process, which upset both users and businesses who needed SegWit to be activated.

Which led to the birth of User Activated Soft Fork (UASF) called BIP 148, or Bitcoin Improvement Proposal 148. Specifically BIP 148 is a user activated soft fork which states that all the full nodes in the bitcoin networks will reject any and all blocks that are created without SegWit embedded in it--encouraging miners to put SegWit activation in the blocks they mine for it to be part of the network.

Bitcoin Improvement Proposals (BIPs) are design documents which introduce various designs and improvements to the bitcoin network. There are three categories of BIPs:

But of course contingencies were put into place in the event BIP 148 failed which would probably lead to a chain split. Thus, UAHF, or User Activated Hard Fork was born.

Created by Bitmain, UAHF was the escape route for those who didn’t want to be part of the BIP 148 proposal, offering a new chain to join. This eventually became Bitcoin ABC’s first release, Bitcoin Cash.

Even with this change, many still didn’t agree with the philosophy behind Bitcoin Cash in relation to its predecessor, Bitcoin.

The reason for the divide stemmed from the disagreements surrounding Bitcoin’s proposed protocol updates that incorporated the use of smart contracts onto bitcoin’s blockchain and increased the average block size.

For those supporting Bitcoin Cash ABC, this sect still used the original Bitcoin Cash client, but added a number of changes to the blockchain, such as Canonical Transaction Ordering Route (CTOR), which rearranges transactions in a block to a specific order.

This is usually referred to as just Bitcoin Cash, as it still uses the original Bitcoin Cash client.

Bitcoin Cash SV, on the other hand, rejected the use of smart contracts on a platform that was initially built for payment transactions--what Nakamoto originally envisioned. This is led by Craig Wright, who claims to be the original Satoshi Nakamoto, which has created enormous amounts of drama and conspiracy-filled theories throughout the digital money community. As of today, we still don’t know the true identity of Satoshi Nakamoto.

Since both sects of Bitcoin Cash have launched, both have seen respectable valuations at exchanges. Aside from block size and SegWit conversations, Bitcoin and Bitcoin Cash are pretty similar, both using PoW consensus mechanisms to mine new coins as well as capping the entire supply at 21 million coins.

One major reason Bitcoin Cash is extremely appealing is because it avoids the replay attack, one of the biggest problems any cryptocurrency could face post-forking.

A “replay attack” is a cybersecurity attack, where a cybercriminal eavesdrops on a secure network (blockchain network) communication, intercepts it, and then fraudulently delays or resends it to misdirect the receiver into doing what the hacker wants. In a blockchain context, a transaction that occurs in one blockchain is taken and maliciously repeated in another blockchain.

Real-world example: A staff member at a company asks for a financial transfer by sending an encrypted message to the company’s financial administrator. An attacker eavesdrops on this message, captures it, and is now in a position to resend it. Because it’s an authentic message that has been “resent”, the message is already encrypted and looks legitimate to the financial administrator, releasing the funds repeatedly.

In blockchain, let’s say Alice is sending 5 BTC to Bob (Bob’s about to be super rich). When a replay attack is involved, that transaction is intercepted by a third, unknown party, and resends that transaction, where Alice will also send 5 BCH, even though she never meant to do that.

Bitcoin Cash has a set rule as to when it decreases its mining difficulty. This difficulty rate changes based upon the number of miners in the system. If there are less miners, than the difficulty rate goes down.

When Bitcoin Cash first came into being, it struggled initially to attract miners. As a result, its difficulty rate dropped significantly, due to the hash rate power going down. When this happened, many miners left Bitcoin and went over to Bitcoin Cash. 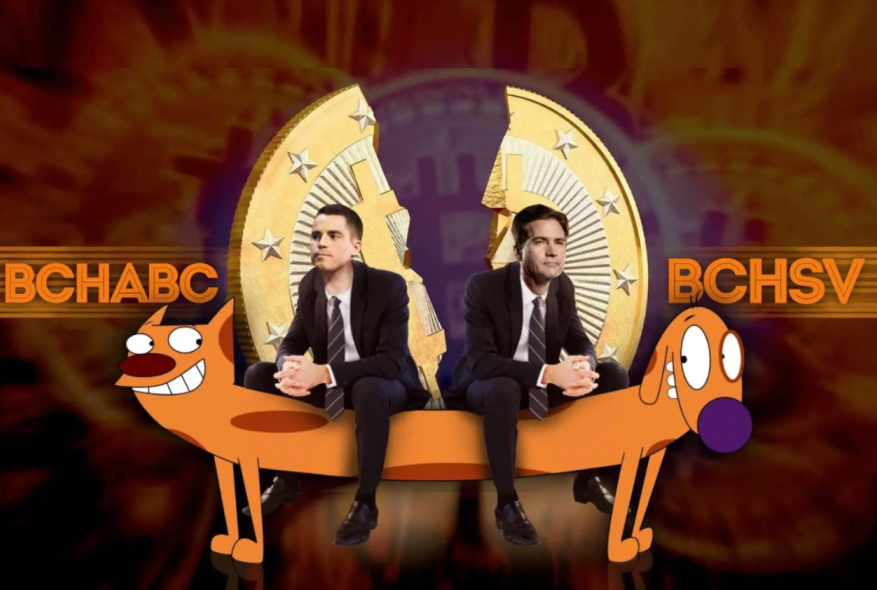 The ongoing “Hash War” is a matter of whether the individual supports Bitcoin ABC, led by Roger Ver and Bitmain CEO Jihan Wu, or Bitcoin SV, led by Craig Wright and billionaire Calvin Ayre, the owner of the largest BCH pool, CoinGeek.

The war started because of two reasons: block size and changes to the Bitcoin Script.

Specifically, Bitcoin ABC wants to limit the 32MB of Bitcoin’s block space, while Bitcoin SV wants a limit of 128MB.

Bitcoin Cash SV does not use these two opcodes, maintaining the two original opcodes of OP_LSHIFT and OP_RSHIFT, which were deactivated in the newer Bitcoin Cash (ABC).

The Hash War has gotten pretty ugly, which is evident by looking at tweets posted to Twitter by Wright and Ver.

It’s hard to say what will become of Bitcoin Cash, but this Hash War has definitely opened the doors to interesting speculation as to the future valuation of Bitcoin.

In July 2020, one industry analyst shared his belief that with Iran potentially controlling 3% of the Bitcoin hash rate and Venezuela accepting bitcoin payments, it’s only a matter of time before the U.S. believes that entering the “space race” for mining bitcoin is imperative, possibly driving up the value of Bitccoin to $500,000.

If anything, this war only further defines and educates the space as a whole on the importance block size has on mining and processing.