What is Quorum Blockchain?

Quorum Blockchain (“Quorum”) was developed by J.P. Morgan Chase back on and it serves as one of the first major steps by an enterprise to push for the common adoption of blockchain technology among financial industries.

What is Quorum Blockchain?

Think Office-365 for the Blockchain. Quorum is an enterprised-focused, permissioned blockchain infrastructure specifically designed for financial use cases.

You have questions already, so let’s jump in.

Depending upon its cryptographic characteristics, hash functions can be applied in two different ways: password storage and data integrity. 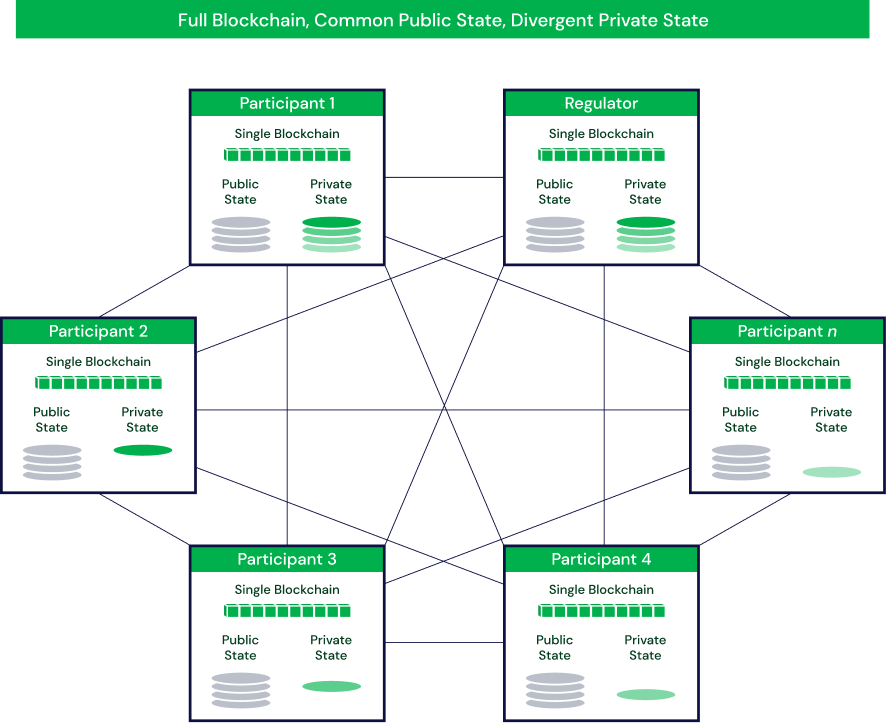 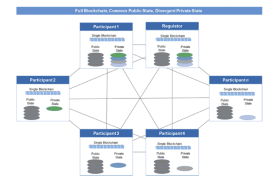 Quorum is built off “Go Ethereum”, the base code for the Ethereum blockchain. However, Quorum differs from Ethereum in four ways:

Quorum is best described in two ways. First, it is a “permissioned” blockchain, which provides for value transfer, smart contract deployment and execution.

Second, it’s a “consortium” blockchain. Ultimately, only certain participants, who are pre-approved by a designated authority, can be allowed onto the network. This is to avoid any potential threat of catastrophic failure or security breach.

Permissionless blockchains, on the other hand like Ethereum, make it available to all.

Consequently, the expectations of trust as between approved nodes than those without permission, are significantly different (even if the architecture between the two is the same). 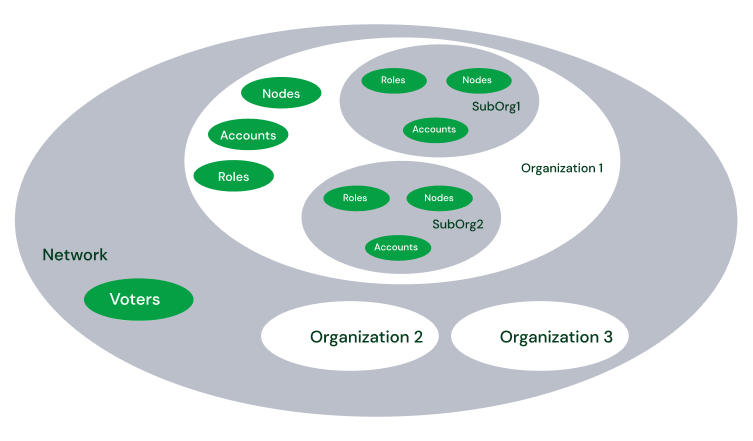 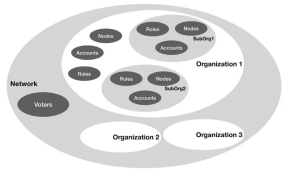 We don’t have to remind you on how important data privacy (and security is). However, for blockchain technology, it’s embedded to its very core and purpose. Obviously, financial institutions have displayed great hesitation in adopting such technology due to the high-risk of failing to keep records confidential--something regular blockchains fail to address.

As a consortium blockchain, Quorum addresses data privacy head on by utilizing “cryptography” and “segmentation”, which prevents everyone but those specific parties to a transaction from seeing sensitive and/or confidential data.

One of Quorum’s most appealing and significant features is the Constellation system. It secures the messages by enslaving it. In this enclave, there are previous transactions, authenticity, and authentications. Thankfully, cryptography makes it a secure and safe mechanism.

Cryptography, a method that’s been used since World War II, is applied specifically to data in transactions, which is visible to everyone on the Blockchain. Segmentation, however, is applied to each Quorum node’s local state database, which contains the contract storage and is only accessible to the node.

Quorum supports both public and private transactions, which are handled through both a “transaction manager” and “privacy manager”. 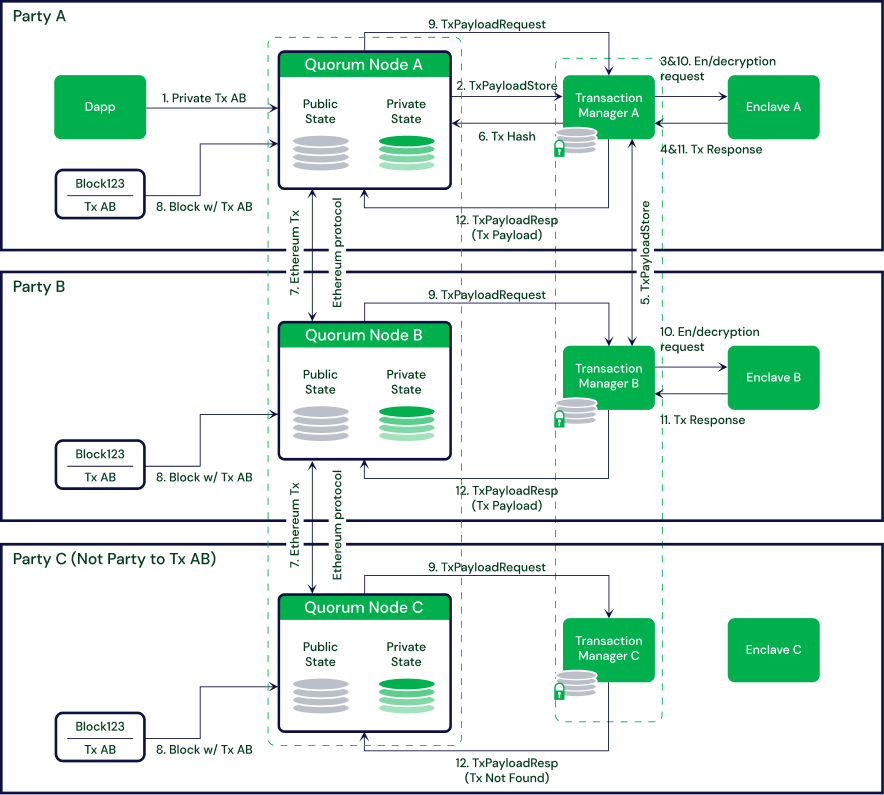 In private transactions, Quorum communicates with the privacy manager using HTTPS, enabling only parties to the smart contract to see what’s contained in the smart contracts. This is a major element as to why banks are hesitant on exposing sensitive information contained in them, such as investment strategies, transaction data, and other sensitive internal information. 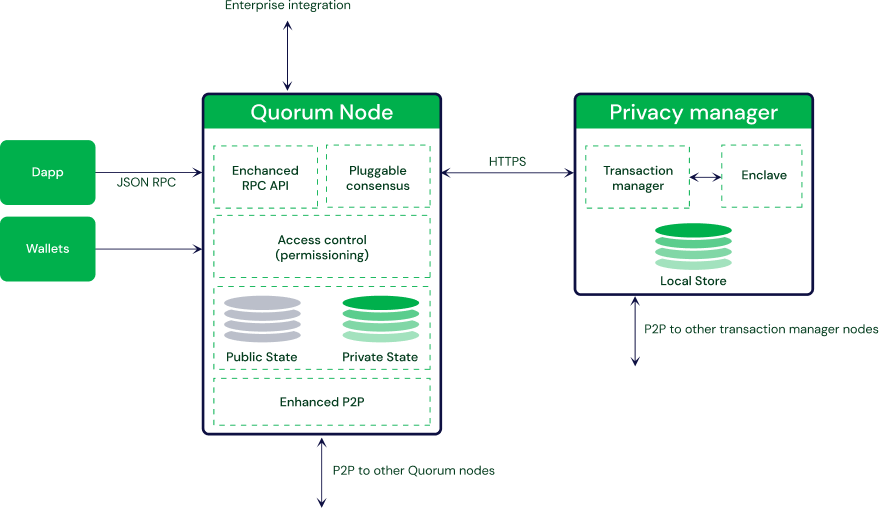 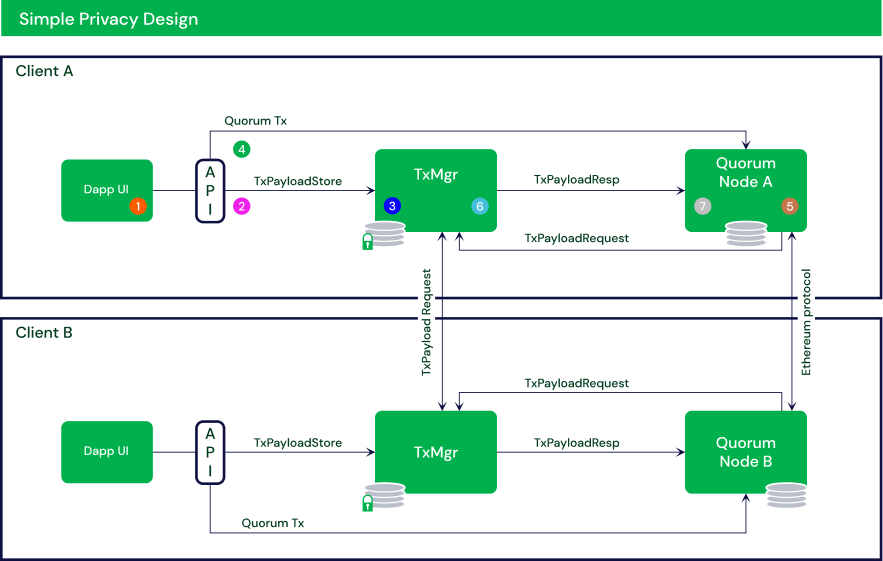 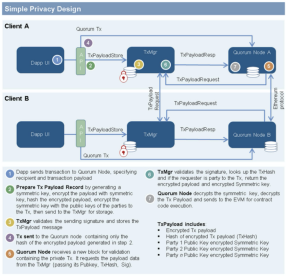 1 Dapp sends transaction to Quorum Node, specifying recipient and transaction payload
2 Prepare Tx Payload Record by generating a symmetric key, encrypt the payload with symmetric key, hash the encrypted payload, encrypt the symmetric key with the public keys of the parties to the Tx, then send to the TxMgr for storage
3 TxMgr validates the sending signature and stores the TxPayload message
4 Tx sent to the Quorum node containing only the hash of the encrypted payload generated in step2
5 Quorum Node receives a new block for validation containing the private Tx. It requests the payload data from the TxMgr (passing its Pubkey, TxHash, Sig).
6 TxMgr validates the signature, looks up the TxHash and if the requester is party to the Tx, return the encrypted payload and encrypted Symmetric key.
7 Quorum Node decrypts the symmetric key, decrypts the Tx Payload and sends to the EVM for contract code execution.
TxPayload includes

Quorum uses a majority voting protocol called QuorumChain, which delegates voting rights to others. The block with the most votes will win and is considered the canonical head of the chain.

The QuorumChain can be found embedded within the smart contract, which assigns voting rights while simultaneously tracking the status of all the voting nodes.

Either way, the TPS makes Quorum suitably designed for enterprise performance. And the key to any enterprise is of course, its security mechanism, RBAC (Role Based Access Control).

As part of the divestment, JP Morgan Chase also invested strategically in ConsenSys, but that deal remains undisclosed as to the size of the investment, according to CoinDesk. As for JPM Coin, which remains 100% JPMorgan’s, it will continue to be built upon ConsenSys Quorum.

Daniel Heyman, ConsenSys engineering manager, has stated that anyone who builds on Quorum will get a proper software vendor behind their technology:

“They’ll get a roadmap that’s very explicit publicly maintained that they can build against and move towards, and a suite of features and functionality they can now purchase to accelerate their time to market”.

What It Can Do For Us?

Aside from JPMorgan’s creation and divestment, Quorum is used in logistics, healthcare, identity protection, property, payments, capital markets, and post trade. In other words, its pretty valuable, hence why JP Morgan upon selling it to ConsenSys, also invested in the newlyformed, ConsenSys Quorum.

For businesses that want to reduce the “human element” of aggregating, amending, and sharing data, Quorum will allow for less manual intervention in these processes, which will in turn provide for employees to spend more time on their actual responsibilities.

Despite being heavily used for financial services (and JPM Coin), Quorum has proved to be fairly versatile, according to CoinTelegraph. Indeed, it’s been introduced into industries where assets like privacy are more desirable than complete public transparency.

There’s a reason why State Farm, Starbucks, Microsoft’s Xbox, SAP, among others have begun their move towards adopting the Quorum blockchain framework.